Just a quick post to let everyone know that my second interview with Steve James of the ‘Guru Viking’ podcast is now up. In this one I talked (as usual, a lot), about definitions of ngakpa (sngags pa, སྔགས་པ), or Tibetan Buddhist tantric yogi householders, and their social roles. We also skimmed the surface of the broad lake of the topic of samaya or tantric vows, ngakpas’ hair, clothing and comportment, and the siddhi, or the spiritual acommplishments or powers that are thought to come from their dedicated practice of tantric yogic disciplines.

Here’s Steve’s breakdown of the episode, along with the YouTube video, and a link to the various places the interview can be found:
END_OF_DOCUMENT_TOKEN_TO_BE_REPLACED

(The One Born From A Lotus, the Precious tantric Buddhist Guru, Padmasambhava)

One of my favourite genres of Tibetan Buddhist literature is so-called ‘words or songs of advice’ texts, known as gtam or zhal gdams in Tibetan. These sorts of texts are great for a number of reasons. For one, they tend to be both pithy and poetic, which makes them a pleasure to read. They often have quite a colloquial flavour, which makes them interesting in terms of style and register. And they are also uniquely practical. While their ethical orientation means that they are focused on ideals and best case-scenarios, the fact that they are intended to be useful as guides means that they are forced to point out faults realistically, to take stock of where their target audience may actually be in their lives or religious practice. After all, the only thing worse than unsolicited advice is advice that has no bearing on the realities of one’s life.

I previously translated and shared a ‘words of advice’ text aimed at ngakpa or non-celibate, tantric vow-holder yogi-householders on this blog. You can read that text by famous 20th century ngakpa Dilgo Khyentse Rinpoche, and some stray thoughts on it here. Today I was taking a read of the much older text of advice for ngakpa on which Dilgo Khyentse Rinpoche based his later commentary: the ‘final words’ or parting testament (zhal chems) of the legendary ON (‘Original Ngakpa’) Padmasambhava (‘The Lotus Born one’) a.k.a. Guru Rinpoche, the ‘Precious Guru’, as found in a biography of this Great Tantric Master who secured the spread of Buddhism in Tibet which was revealed by the tantric visionary saint Nyangral Nyima Ozer in the 12th century. Dilgo Khyentse’s words of advice for ngakpa in the early twentieth century are directly inspired by the testament of the eighth century Padmasambhava as reported in Nyangral Nyima Ozer’s twelfth century revelation, END_OF_DOCUMENT_TOKEN_TO_BE_REPLACED 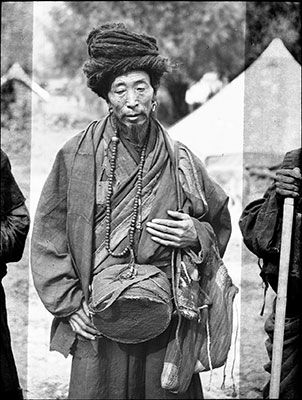 (A photograph of an itinerant Nyingmapa yogi with prominently displayed trengwa or Buddhist prayer beads, one of the central tools of mantra healing, taken in 1936 in Lhasa by British army officer Frederick Spencer Chapman, 1907-1971. Chapman visited the Tibetan capitol between 1936 and 1937, where he served as personal secretary to Basil Gould, the British Raj Political Officer to Sikkim, Bhutan and Tibet. Gould went to Tibet in the hopes of persuading the then 9th Panchen Lama to return to Tibet from China, to where he had fled after the 13th Dalai Lama had clamped down on his power and holding due to political differences)

In the post that follows I offer yet another translation of a chapter from Tibetan tantric yogi and traditional doctor Dr Nida Chenagtsang’s book on Tibetan Mantra Healing (I’ve already provided translations of a number of chapters from this book, called rten ‘brel sngags bcos rig pa in Tibetan, here on my blog – you can find these posts by searching under the tags ‘dr nyida chenaktsang’ and ‘mantra healing’). In this short chapter Dr Nida provides an overview of ‘things to avoid and things to take up’ (spang blang) when doing mantra healing, using a traditional Buddhist turn of phrase which I’ve rendered more colloquially and chattily here as ‘dos and don’ts’. In the sections that follow, Dr Nida outlines suggested everyday behaviour and dietary prohibitions for tantrikas and mantrins and describes common ritual taboos connected with mantra healing practice as well as the optimal times and locations to do different kinds of tantric or mantric rituals.

Central to Dr Nida’s explanations is the concept of ngaki nüpa (sngags kyi nus pa) or ‘mantric/tantric power’ or ‘efficacy’. Anyone can recite the syllables of a mantra, but according to Tibetan cultural understanding there are a number of factors which contribute to whether or not a mantra will actually produce tangible results END_OF_DOCUMENT_TOKEN_TO_BE_REPLACED

Existing readers of this blog will know that my PhD research is concerned with ngakpa and ngakma (sngags pa/ma, the name for make and female long-haired, non-celibate tantric Buddhist vow-holders, ritual specialists and yogis). Ngakpa have been a crucial part of Buddhism in Tibet since the point of its very inception in that country, yet there continues to be a lot of misunderstanding about who ngakpa and ngakma are, what they do, what vows they hold and what role they have had or should have in Tibetan communities.

Dr Nida Chenagtsang is a ngakpa, traditional Tibetan doctor, scholar and teacher who hails from Malho in Amdo, North-Eastern Tibet. As I have mentioned elsewhere, for many years, he and his brother have committed themselves to preserving and promoting the Ngakpa tradition of non-celibate tantric practice both in Tibet and beyond. END_OF_DOCUMENT_TOKEN_TO_BE_REPLACED

Following on from an earlier post where I offered a rough translation of a Tibetan praise-poem to the long-haired, white-robed community of non-celibate tantric Buddhist ngakpa and ngakma, I thought I would share an equally rough translation of another ཞལ་གདམས (zhal gdams, pronounced something like shaldahm/jaldahm) or ‘oral advice’ text for ngakpa – this time, one given by the great tantric yogi, scholar, treasure revealer and Dzogchen meditation master His Holiness Dilgo Khyentse Rinpoche. END_OF_DOCUMENT_TOKEN_TO_BE_REPLACED 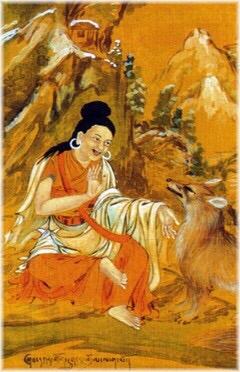 Recently, some non-Tibetan practitioners of Tibetan tantric Buddhism or Vajrayana were asking me about some informal advice texts or ‘speeches’ ༼གཏམ། tahm༽written in Tibetan by great ngakpa ༼སྔགས་པ།༽ or non-celibate tantric ritual specialists and whether these had been translated into English. In the course of looking into some of these older texts, I was reminded of a Tibetan blog post from 2009, which represents an interesting variation on the genre of advice speech for ngakpas, by ngakpas. So I thought I would translate it – very roughly! – and share it here.