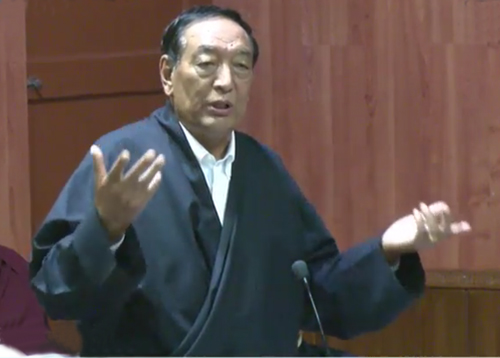 (Pema Chinnjor, the current kalon of the Chorig Lekhung, or minister of the Religion and Culture Department of the Central Tibetan Administration in exile)

Below is a translation I made of part of a recent article by Dondup Tashi that appeared on the Tibetan news site Tibettimes.net on the 25th of March 2016, which deals with concerns about the fact that the majority of students in the reconstituted Tibetan monasteries in exile are now not in fact ethnic Tibetans, but are Buddhists of Himalayan descent. While in recent decades sarjorpas, or new arrivals from Tibet (i.e. Tibetans typically born and raised in occupied Tibet, who have come to live in Tibetan exile communities more recently), have made up the primary demographic in the exile monasteries, things have now changed. In addition, very, very few exile-born Tibetans are choosing to become religious professionals, monastic or otherwise. There are a number of reasons for this, that deserve fuller consideration. Ultimately though, it seems to me that this movement away from professional religious vocation in exile, along with big lamas spending much of their time either tending to students and institutional responsibilities in the settlement-monasteries or focusing their energies on non-Tibetan congregations and other projects abroad, leaves something of a religious vacuum for a new generation of lay Tibetans in exile. These young Tibetans may genuinely want to follow the Dalai Lama’s repeated advice to engage with their own traditions as ’21st century Buddhists’ and do more than just perform rote rituals out of naive habit or ‘blind faith’ (རྨོང་དད, rmong dad, mong deh), but may often feel like their opportunities to engage as lay people in an extended or intensive way with the study of Tibetan Buddhist traditions are somewhat limited. This is something I’m concerned with in my own work on ngakpa, who in their capacities as non-celibate householders and village ritualists have historically both been closer in many ways to lay communities and their needs, and have represented an alternative religious orientation to monasticism.

Today in a meeting, when asked about what the ratio of ethnic Tibetans to Himalayan people had become in Tibetan exile monastic communities, the Religion and Culture minister gave (the following) clarification.
In this afternoon’s meeting of national representatives, in connection with the establishing of the exile Tibetan administration’s Religion and Culture budget, and in an answer elicited by the questions of Kagyu sect representative Tenpa Yarphel, Religion and Culture minister Pema Chinnjor made the following statement. (Tenpa Yarphel noted that) recently the high lamas of the various Tibetan schools and lineages had convened in Dharamsala, (and said that) since all the attendees raised unanimously as their greatest concern the problem of fewer and fewer ethnic Tibetans staying on as monks in Tibetan monasteries in exile, (he would like to know whether or not the exile administration’s Office of Religion and Culture has actually conducted research into this pivotal issue, and, if they have, how they are proposing that the problem be resolved. Mr Pema Chinnjor stated:

“We have done research on the various monastic communities and exile monasteries. Right now, altogether there are more than 40 000 monks and nuns (in exile). When we did research to find out how many of these were of Tibetan and how many of these were of Himalayan descent, (we discovered that) the Himalayan monastics were already at around 55-58%. Of this proportion, Geluk are only somewhat (represented), and monastics of Himalayan descent are even greater in other lineages. Everyone is troubled by this.

“Previously, after 1979, after Deng Xi Ping’s policy of opening up (liberalization) more than 80% of monks and nuns in exile monastic communities had come from Tibet. Now, the Chinese government has blocked things, and Tibetans coming from Tibet have really dwindled. Within Tibetan exile communities it’s very rare to sent one’s own children to become monastics. The chief lamas from the different dharma lineages have discussed this problem at length and have ultimately said that we must work hard to find a way to keep learned sangha members in the monastic communities without losing them to foreign countries, but little else has been said beyond this and that it needs to be done.”