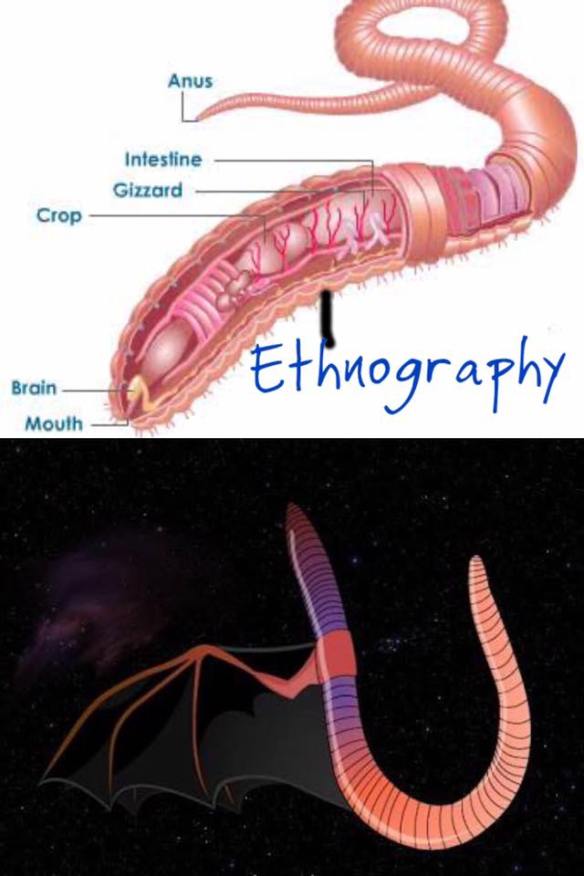 When I was about 12 years old my Dad got worms. He got a lot of them, and it ended up being quite awkward. He didn’t get them in his guts, though, but in a washing machine.

I had forgotten all about this episode in my Dad’s and mine own life until just now, when I was talking to a friend of mine on Facebook, Austin Coppock, about animism and the difference between not believing in versus distrusting in magic and spirits. Chatting with Austin, I raised the point that it was all too common that, when speculating about ancient human origins, worldviews and behaviour, many people liked to bolster their hypothetical claims about our ancient ancestors’ experience of reality by pointing to groups of living people – usually indigenous, ‘non-Western’ ones – who have supposedly somehow retained imagined primordial characteristics of consciousness. This was something of course that got my anthropology hackles up – the whole living fossils schtick was tired, lazy and gross, I said. When it came to anthropologists’ fairly recent resuscitation and re-evaluation of concepts like ‘animism’ which were laden with all kinds of imperial, white supremacist racist baggage, the tendency to slide into cultural essentialism and all kinds of intellectual laziness and grossness was especially prevalent.

“Yeah, well. That’s sort of anthro’s karma at this point isn’t it? Digesting the lazy and gross bits. But its hard. The study of humans is a sincere challenge – probably a more ambitious one than the study of (relatively) inert matter.”

The reason my Dad ended up with a washing machine full of worms was because of his friend David. David is one of the most intellectually omniverous people I have ever met. David has written a column in a newspaper in South Africa for many years, and he and my father have the shared experience of working as TV reviewers. While I was growing up David always had some new venture or interest, which we kids got to hear about or experience when we visited his home or spent time with him. From month to month, as part of some fresh project, David would channel his energies into areas of art, history, technology, biology what-have-you which he’d hitherto not explored, and whatever it was would make its presence known in his conversation and surroundings. Maybe he was making a documentary. Or developing a screenplay. I seem to remember coming over to his house once and there was a monitor lizard in the bathtub (I may have imagined this). Another time he charged my father, when the latter was still travelling throughout Southern Africa for the morning TV aerobics programme he presented, to locate and smuggle back from Zimbabwe onto South African soil, a rare and giant multicolored millipede for him in an empty ice cream tub, which David then kept in a tank and fed whole lettuces to.

So, unsurprisingly I guess, at one point David became enthused with earthworms. Before it was hipster-cool to be sustainable and organic, before worm-farms were totally a thing, David started keeping his own earthworm collections and feeding them vegetable scraps so they’d make soil for his garden. I guess his enthusiasm was infectious or he really just had too many worms because somehow he persuaded my Dad to take some. At the time I was living with my Dad in a five or six story apartment block. My Dad had no garden and had never graduated beyond one or two diminutive if determined potted cacti. He decided to put his thousands of inherited worms in a shelled out washing machine in the garage (I’m not sure anymore exactly why it was there either). At the time, I was in my last year of grade school, and I still had my two pet insect-eating bats – I was a certified bat worker and rehabilitater, you see (seriously) and I had at that point been involved for many years with bat conservation and research efforts in my hometown. People regularly brought me injured wild bats, I would nurse them to health, and then release them again. My two pet Yellow House bats Potroast and Biltong were a couple and non-releasable though (Potroast was an amputee with one wing, and his lover Biltong had required such lengthy and intensive care to be nursed back to health after severe poisoning and dehydration, and had bonded so much with her species-mate Potroast in captivity, that she had become tame and wasn’t going anywhere). Round about the time my father got his worms the city had been experiencing a mysterious mealworm shortage and fertility dip, and in place of this regular home-grown food we had had to resort to feeding my bats on what we called ‘gloop’, a live-insect vitamin-fortified substitute food made of egg, bread and some other choice ingredients. The gloop was a poor substitute though and significantly affected the bats’ general level of health with prolonged use.

At a loss for what to do with his embarrassment of earthworm riches my father suggested I try to feed some to the bats. I told him the idea was ludicrous, since well, earthworms live underground and well, bats are aerial hunters but he didn’t want to squander any possible opportunity to actually make use of David’s strange gift, or to potentially help the bats who he was very fond of. So I humoured my Dad. I don’t think I will ever forget the look of unbridled shock, disgust and sheer indignation that flashed across Potroast’s squishy little hamster face when the slime of that writhing earthworm touched his lips. It was nothing short of the jolting horror of two worlds, of earth and sky, rudely colliding. My Dad gave up his hopes, and the earthworms too, shortly after.

These days, a lot of anthropologists are talking about the public role (or lack thereof) of our discipline, about accessibility and the broader reach and relevance of the field. Part of me quite likes the idea of anthropologists’ labour being like that of the earthworm. Much of anthropologists’ work involves attending to everyday, grass-roots details of people’s lives – even if anthropologists are studying what is spectacular, unprecedented, peculiar and devastating they often try to hold such experiences and events against, and ground them in, more general social and historical contexts, and in what can often seem like routine, banal and taken-for-granted realities and perceptions. Something as humble, underfoot and inconspicuous as the earthworm seems like a good mascot then.

Anthropologists’ work often serves to complicate existing narratives, policies, or assumptions. The best ethnographies capture something of the diversity, messiness, contradictions, and non-repeatability of human lives and experiences, while putting these into useful dialogue with larger structures, policies, and trends. Ethnographic insights often work against timeless, homogenizing or essentializing positions. The ‘anthropological veto’ – anthropologists’ commitment to challenging potentially harmful invocations of the ‘only natural’ ‘totally inevitable’ and ‘just common-sense’ can be frustrating, since they can feel like a movement away from certainty and solutions. This can mean that anthropologists often have more questions than answers, can make it seem like the discipline is interested in opening up cans of worms but not in eating or doing anything with them.

Austin’s turn of phrase is suggestive of the kind of useful public service anthropologists might do though. If we are earthworms then maybe by chewing on and digesting the garbage of our colonial past and present, as well as on intellectually lazy representations of cultural difference, ‘tradition’ ‘modernity’ and all the other mouldy chestnuts, we can poop out high-quality humanistic manure that can enrich other thinking and projects.

Like with Potroast, the slimy disorderliness of the human/social sciences with their ‘reactive’ subjects that wriggle around and swim through environments of their own intimate making, isn’t everyone’s cup of gloop. When you’re accustomed to sounding out the world through sophisticated technologies like echolocation, when you’re used to looking at things from the skies, upside down, or high above, a worm’s eye view, or being stuck on the ground can feel pretty insubstantial or limited, or even gross and contaminating.

Of course, one can stretch (and I probably already have stretched) the analogy too far. I’m pretty sure actual earthworms do far more indispensable and far-reaching work than anthropologists ever have (although if funding hierarchies and priorities in academia are anything to go by, it’s probably safe to say a lot of people think of socio-cultural anthropologists as floppy invertebrates).

With what sometimes feels like the still only fledgling inter-disciplinary and inter-collegial activity happening on a lot of campuses, university departments can seem more like worms in a washing machine than specialized corners of full-fledged knowledge ecosystems or biomes. I don’t know. I’ve probably milked this analogy way too hard. I’m curious, though: Is it anthropologists’ karma to be earthworms? If so, should we be happy with this role or should we be focused on transmigrating to new trophic levels? And for those who hate worms/anthropology/ extended metaphors/me I’m really sorry.

1 thought on “How my Dad got Worms: Academic Karma, and Wondering what Anthropology is even good for”