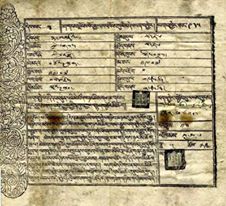 This is an amazing piece of history, courtesy of the illustrious historian of Tibet Gen Tsering Shakya la. What you see here is a Tibetan gun license, issued by the Tibetan central government in 1949. The document lists the gun-bearer’s names, place of birth and residence etc. and is license number NINE HUNDRED AND THIRTY FIVE. It features a list of various stipulations, which include admonitions to keep the permit along with the gun, that only one license will be issued per weapon, that one shouldn’t lend one’s gun to others and that owner-less firearms are not ok, that unlicensed secretly carried weapons will be confiscated, that aside from self defense of the bearer the gun may not be used to do any kind of harm to others, that if the gun is used to commit illegal actions both the owner and witness/voucher will be held as guilty, and so on.

Not only is this a rich piece of evidence for the existence of sophisticated state structures in Tibet prior to Chinese colonial occupation but it also shows that 1949 Tibet arguably had more thorough gun regulation than the contemporary U.S.A.