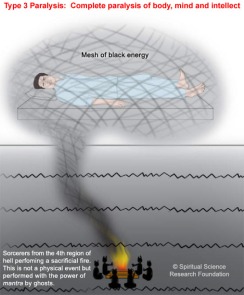 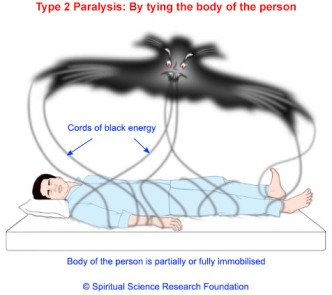 A while back Vice published this piece reflecting on Rodney Ascher’s documentary cum horror film about people’s experiences of sleep paralysis. Over the course of my life I’ve experienced sleep paralysis/terrifying ‘waking’ night visitations several times. I think the link between so-called sleeping disorders and phenomena like out-of-body-experience, spirit visitation and alien abduction is compelling, and the idea of learning to relate to the experience and its attendant beings differently is interesting and sounds very sensible to me. That said, I’m wary of reductive explanations – after all I’ve experienced out-of-body and menacing spirit encounters just as often if not more so without any associated sleep paralysis.I came across this other popular piece on sleep paralysis and its possible science. Granted, it might not be the most tightly or carefully written article and is maybe thus kind of low-hanging fruit, but it did get me thinking a little about how the work science/scientists supposedly do in the face of the ‘supernatural’ and the ‘cultural’ is popularly represented. I appreciate how Jalal, the main researcher mentioned in the piece, doesn’t automatically dismiss the experiential, ‘supernatural’ elements of his research subjects’ experiences. Rather than treating these as mere cultural fluff/obfuscation, he attends to them on their own terms and is able to (at least theoretically) reverse engineer some of the neurological processes involved, and to design new experimental and clinical interventions. Well and good.
That said, I find this kind of pop science writing both fascinating and frustrating. Look at this passage for example:

“Out-of-body experiences happen during sleep paralysis as a result of brain-body desynchrony. When a sleeper realizes they’re paralyzed and tries to wriggle free, the motor cortex in their brain sends messages to their limb muscles to let them move about. The cortex, however, isn’t “aware” that the person is still stuck in REM sleep. Jalal thinks that the parietal lobes monitor communication between the motor cortex and muscles, so that when the cortex fires off a “move” command, it sends extra signals — which Jalal cleverly likens to “CC-ing” — to the parietal lobes.

If the person weren’t stuck between states of consciousness, the muscles would get the message, move as instructed and send feedback to the parietal lobes. But, during sleep paralysis, the parietal lobes don’t get that feedback. Therefore, the sleeper can’t move but may feel as though they do. As a result, the signals bouncing between the brain and body, normally vital to controlling a unified sense of self, are out-of-whack, leading to trippy visions, such as the feeling of hovering over one’s own body.”

The author, Theresa Fisher, is ostensibly using current scientific insights to explain what really causes the cultural phenomenon of astral projection. Yet in order to do so she ends up doing some things that give me pause : 1) she personifies the brain 2) she relies on tired and safe-to-say inadequate ‘your brain is totally like a computer’ analogies and 3) she implies that the distinction between something called ‘brain’ and something called ‘body’ is somehow clear-cut, natural or self-evident. I appreciate Jalal’s emphasis on the role of ‘cultural priming’ to understand how socialization and preexisting expectations will shape a person’s experience of neurological phenomena, but it seems like cultural priming is just as much to blame for how this science writer has framed what’s really going on with these spooky phenomena as well. If I have to resort to anthropomorphizing my nervous system in line with parochial cultural cliches to explain a cultural phenomenon scientifically, then to what extent (and by what means) is my explanation any more or less enlightening/desirable for understanding the relationship between consciousness and reality than saying ‘a spirit from another realm came in the night and pressed down upon me’? (Legitimately asking!)

From personal experience and from quizzing others I can say that Jalal’s ‘meditation-relaxation’ approach to dealing with sleep paralysis-spirit visitation nightmares has merit, but again, I wonder about the point of research like this when ground-breaking interventions by scientists pretty much amount to ‘recognize that the experience is emerging from some larger field of experience/consciousness, relax, breathe, think happy thoughts and say a prayer’? Because this seems a lot like the advice that meditators, magicians and shamans have been dispensing for ages, only dressed up in a different language or rhetoric. Like with this related post, It’s entirely possible I’m being too glib here – and I’m biased – but it seems to me that traditional, ‘supernatural’ approaches for engaging with phenomena connected to sleep paralysis may actually provide richer resources or vocabularies, and more nuanced interfaces for engaging first-hand with such phenomena than the pretty vague and bloodless seeming science-plainy suggestions we’re left with in the piece. (Which is not to take away from important neurological discoveries about how ‘neural maps’, phantom limbs, and body dysmorphia shed light on sleep paralysis though).

Still, In the Tibetan Buddhist meditative practice of Chöd (‘severing’ or ‘cutting’), for example, the meditator is instructed to both explicitly seek out scary encounters with demons and to realize that these are experiences arising within mind, experiences whose fearfulness can be transformed through calm, compassionate, and undaunted engagement and direct insight. The Chöd practitioner has at her disposal a complex repertoire of melodies, liturgies, dance moves, ritual gestures, visualization and prayer through which to engage with demonic others. Indeed, 11th century yogini and Chöd teacher Machik Labdrön not only promotes a similar ‘reappraisal’ of the immediate experience of malevolent spirit encounter as Jalal, she goes on from this to propose, pithily enough, a more far-reaching theory of consciousness:

“The origin of all demons is in mind itself. When awareness holds on and embraces any outer object, It is in the hold of a ‘demon’.”

What do you think? I feel like there’re some potentially interesting things to be said about overlapping and competing jurisdictions and expert knowledge-systems here. How should we understand the role and knowledge of various native ‘spirit’ specialists contra that of neurologists? The relationship between the two in the article seems to be hierarchical – ‘native’ systems are treated as ethnographic data to be processed by scientists, who use these to further their understanding of hard, material reality AND to supposedly refine therapeutic interventions. But then a lot of what comes out in the end strikes me as a more impoverished version of those initial native strategies and models. How does one body of knowledge or one methodology serve or inform another, and to what ends?